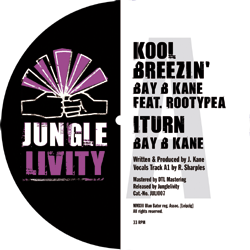 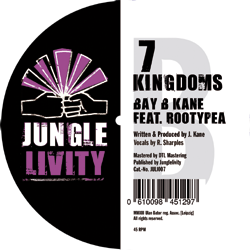 Bay B Kane seems to spell his own musical language with ease. Three new tracks count the release of Junglelivity 007 coming up with rolling b-lines full of beautifulness and sparkling soundscapes of dreams but all flavoured with the special touch of Bay B Kane`s ruffness on beats and drums.
"Kool Breezin" and "7 Kingdoms" (only on vinyl) introduce Bristol based singer Rootypea on Junglelivity. Her voice give an extra intense flow to Bay B Kane`s composition.

Superb liquid jungle, with some great ambiances, sometime at the limit to be trance (but not acid). A real solid groove comes with hypnotism, and melodies spreads like peacefull sensations... This record is unique. And Junglelivity brings again something that does no texists... An easylistening oldschool liquid jungle... Superb ! - Toolbox