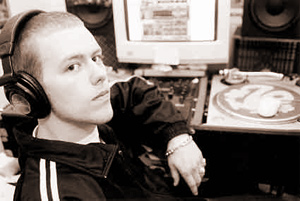 Krinjah started his mission as many other Canadian producers like Debaser, DJ K., KGBKid or RCola in the dawn of the current century. Their goal was to refresh the Jungle music as its arose from the 90ties with wicked Ragga vocals and tricky amen breaks. Krinjah released first tracks on his own label Handgrenade Records followed by many others like King Kong or Cause&Effect. His inimitable amen breaks became a trademark and with some respect and due to his talent he was called the Golden Boy of Ragga Jungle. As the Canadian Ragga Jungle movement reached his peak around 2006 Krinjah dismissed to publish new tunes by a label. Therefore, the track Say Goodnight on Junglelivity 2008 has been one of the last one on vinyl. In these days, he is still touring as dj and missionary for Ragga Jungle through the world.